As an inveterate carnivore, I finally have to express my…

about all this vegan hype.

Is it a fad? Is it justified? Are THEY a bit over the top?

I can remember that – I do not know exactly when it started – the same hype has been made about vegetarians a few years ago. At that time it said, that it is nonsense, they are crazy, how can survive, etc., etc.

Nowadays, we are dealing with the “extremists” of the herbivores. Some of them are quiet liberal, others so radical that they even impose vegan nutrition on their naturally carnivorous pet. The result was recently viral in Social Media …

Now that the wave of astonishment and / or outrage has subsided over the vegetarians and accepted in society, we must now grapple with the absoluteness of vegetarianism.

While the vegetarians, depending on their attitude, still accept food such as cheese or eggs, it looks quite different with vegans.

The one who follows this trend in absolution rejects everything that comes from the animal in its entire life: natural products produced by the animal, such as honey or milk, animal-derived materials such as wool, silk, etc.

But why more and more follow this trend of the radical herbivore?

The primeval man has become a carnivore since the day when he learned to make a trap out of a few bendy twigs, kill his food with a stone thrown after it and, during ice age, that he no longer freezes his ass off with the peeled coat of his animalistic prey.

This fact certainly raises the question, what was before? Maybe, in the beginning, man was really just a greens-devourer. However, as evolution went on, man has genetically evolved over the time passed since, to be dependent on the nutrients that meat provides to the body to survive.

As can be seen from the exemplary table, cereals and vegetables also provide minerals, but the availability to the body is crucial. Meat is not only rich in minerals such as iron and zinc, which play a major role in the human blood balance, but also very important for women during menstruation. In healthy adults, the uptake of zinc from beef into the intestinal wall (absorption) is three to four times higher than from cereals. While animal protein promotes the absorption of iron and zinc, the phytate contained in grain worsens it. (Source: http://www.fleischexperten.de/lebensmittel-fleisch/moderne-ernaehrung/funf-gesunde-grunde-fleisch-zu-essen/)

The same applies to the intake of vitamins, which can certainly be obtained from fruits and vegetables. In the table stands out especially the vitamin B12 and D, which occurs only in animal products.

It is not without reason that both vegetarians and vegans need to supplement these artificially produced nutrients. This is especially true for pregnant women. Especially if they want to live vegan, they must pay more attention to the supply of minerals in order not to jeopardize the healthy development of the child … a huge business for the chemical industry by the way…

The nutrition expert Dr. Roger Eisen says: “The main problem with vegans and some ovo-lacto-vegetarians is ultimately the B12 deficiency” – and recommends to all plant eaters “a regular control of blood levels to detect deficiencies and compensation. In small quantities, the vitamin is found in fermented plant products such as sauerkraut – but in a form that the body also is not able to use.

The compound is needed for DNA formation. Thus, the vitamin is involved in cell division and the proper functioning of the nervous system. If the doctor detects a deficiency in this vital substance, vegetarians and vegans must compensate with vitamin B12 tablets.” (Source: https://www.lifeline.de/ernaehrung-fitness/gesund-essen/von-eiweiss-bis-b12-braucht-der-mensch-fleisch-id105861.html)

Finally, this is the point that has prompted me to write this article in my blog.

I read an article a few days ago about a well-known German vegan blogger. She also followed her vegan diet during pregnancy. Accordingly, many of her family and friends attacked her, as the body of a pregnant woman is known to work at peak performance. I am happy for her and her child that her son was born healthy and without physical and mental problems. Logically, she feeds him to this day vegan with medical advice, with the consequence that he gets the artificial vitamin B12 drops additionally since his birth.

In the report, she said that her son now does not accept the sausage or cheese offered to him. And, when he asks why the children in kindergarten get such things to eat and he does not, she explains to him that they (the family) just do not want to hurt animals.

Here, however, it was coming to my mind what her son will think when he gets older drawing more and more logical consequences. Wouldn’t he think that all other meat-eating children and fellow human beings are just terribly cruel animal tormentors? In addition, may this lead at such an age to other (psychological) problems? A possibly sensitive child would surely burst into tears every time someone eating a sausage bread …

Why is it so bad to be Carnivore?

I think the question is not why, but how it had to get that far, that former meat eaters decided to live only on vegetables. 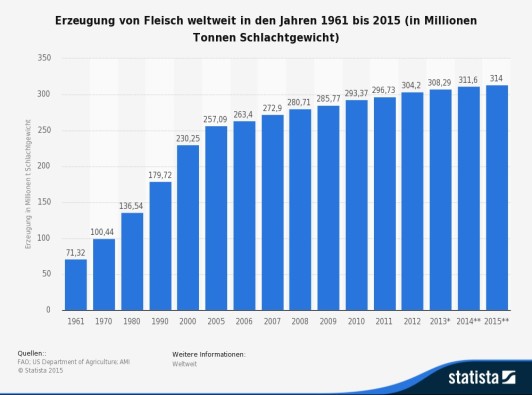 According to this report from http://www.business24.ch, “In 2013, 79.3 kilograms of meat were consumed per capita in developed countries and 33.3 kilograms in developing countries. An older statistic from 2010 shows that the world’s strongest meat eaters live in Luxembourg and the US at 142 with 126.6 kilograms per capita per year. The lowest consumption was in Bangladesh and India, whose inhabitants consumed only 3.1 and 5.1 kilograms per capita per year. Overall, however, Asia is on a rapid recovery – in China, the annual consumption of meat per capita has already exceeded the 60-kilogram mark.

… interesting, as one connect the idea that Chinese actually eat more vegetables than meat.

If you look back at all meat scandals of the last two decades, starting with the “Mad Cow Disease”, factory farming and chemicals in eggs, etc., you should actually ask yourself if it makes sense to come back to your roots.

Therefore, at this point, I would like to make a breakthrough for all convinced meat eaters in the world – not only because I too belong to those who prefer to further utilize personally a medium roasted beef fillet instead of throwing it in the bin … and my understanding / incomprehension for the vegan variant of vegetarianism.

Since I live in Crete, I got to know the highly praised and propagated “Mediterranean or Cretan Diet”, which is based mainly on the consumption of vegetables, legumes and fruits. In connection with the Greek Orthodox beliefs about the fasting, during which the Greek people nourish purely vegetarian*, my attitude to the consumption of food in general has changed fundamentally. I realize that every time I make a “detour” to my old homeland Germany.

In my early days in Crete, I had to learn that you cannot buy lettuce, cucumbers and tomatoes in the winter – or they were incredibly expensive. 20 years ago, there were almost only seasonal vegetables and fruits available. But that did not bother anyone … on the contrary. In the meantime, however, this has changed somewhat, at least as far as concerned lettuce, cucumbers and tomatoes, since the climatic conditions of the island allow to grow in certain regions even in winter.

For another example: in February / March, strawberries are available at reasonable prices on the market. These disappear soon after and are replaced in July / August by super juicy watermelons in huge quantities. In September, during the harvest season, you can buy sweet grapes. During the rest of the year, these fruits can not be found on the market if they are not imported by supermarket chains from far away.

What I’m going to say about meat consumption is that we need to think about whether it’s really necessary to bring meat to the table every day. It is also a principle of the “Mediterranean Diet” that meat should only be eaten once or twice a week. A principle that I have achieved in my own family …

In my opinion, this whole vegan hype was created by the fact that the mass animal husbandry simply overreached. If we of the industrialized countries would take ourselves a bit more back and pay more attention to why and how much we consume and if this consumption and mass production is really necessary, the vegetarian “extremism” would not have come up. But, at this point I do not mean that here “organic”, “ecological”, etc. must necessarily be respected. But that’s also an other topic with no less scandals …

With this background, I am very understanding for vegetarians and vegans. However, I still do not understand why extreme vegans really reject everything from the animal, which also means not to eat honey, because it is produced by an animal or not wearing clothing or not wanting furniture covers whose starting material comes from the animal. Even with intense thought, I really cannot find an explanation … except maybe because they do not want to kill animals to get the leather. But does that explain the non-consumption of honey …?

Conclusion: If I ever decide to do without meat, I would prefer the ovo-lacto-vegetarian* version. Vegan would not come to my table.

Regarding the vegan child, I think that it should decide for itself whether or not it wants to live vegan. However, this means for vegan parents, to offer the child all options, and, when it’s old enough, to decide how it wants to nourish. After all, today’s vegan generation grew up Carnivore and has deliberately decided at some point to live vegan. To some of their children this right of decision is denied from birth.

* Ovo lacto vegetarians eat not only vegetable foods but also eggs and milk (“ovo” = egg, “lacto” = milk). Lacto-vegetarians avoid eggs as well as meat and fish. Ovo vegetarians, on the other hand, eat eggs but no milk.
In Greek Orthodox period of fasting, meat, fish, eggs and milk are not eaten. Seafood and snails are allowed.

This site uses Akismet to reduce spam. Learn how your comment data is processed.